Quite possibly the finest American-born women’s hockey player competing today, the year 2013 has brought with it a year of great milestones. The first three months saw Knight carve a great legacy within the ranks of the Canadian Women’s Hockey League.

Although Knight finished third in the CWHL scoring race, and second among rookie scorers, she did manage to lead all American-born players in scoring. Perhaps more impressive, Knight, a CWHL rookie no less, became the first American to win the CWHL Most Valuable Player Award.

She would follow up the accolade by leading all players in scoring during the Clarkson Cup playoffs. Her scoring touch helped her club team, the Boston Blades, prevent the Montreal Stars from claiming their third consecutive Cup.

Knight celebrating the Clarkson Cup win with Meaghan Duggan. This dynamic duo has also won the NCAA Frozen Four and IIHF Women’s Worlds as teammates too. (Photo by Brandon Taylor)

A few weeks after her Cup win, she would duplicate the feat with the US National Team at the 2013 IIHF World Championships in Ottawa, Canada. Facing an undefeated Canadian rival in the gold medal game (who had never lost a gold medal game on home soil), Knight helped the US contingent to its fourth gold medal in the last five IIHF Women’s Worlds.

While Knight has left an incredible legacy in women’s hockey, she also has an affinity for the great summer pastime of baseball. Two great baseball moments would help define Knight’s off-season.

Despite rainy conditions, Knight proudly joined her Blades teammates as part of a pre-game ceremony at Fenway Park in Boston. Recognizing the Blades’ Clarkson Cup victory, the team was allowed onto the hallowed field for a pre-game ceremony. 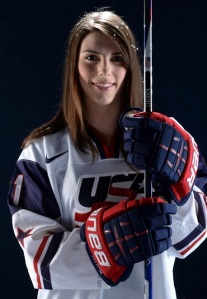 A second baseball event would follow a few weeks after the Fenway ceremony. Back in her home state of California, Knight caught a game at Dodger Stadium in Chavez Ravine. Joining her were four USA Hockey teammates; team captain Julie Chu (who played against Knight in the Clarkson Cup finals), Amanda Kessel and the Lamoureux Twins, Jocelyne and Monique.

These five fantastic hockey players were in Hollywood with Harry How, a photographer for Getty Images. As part of a photo shoot to help promote the efforts of the United States Olympic Committee at the 2014 Sochi Games, Knight and her teammates proudly represented the growing game of women’s hockey.

Even in the warm sun of California, Knight cannot escape hockey. Along with a baseball game at Dodger Stadium, Knight and her teammates were welcomed to Staples Center to catch a postseason sporting event. With the NHL Conference Semi-Finals underway, they had the opportunity to catch the Los Angeles Kings and San Jose Sharks in a playoff tussle. In addition, Knight had the opportunity to be featured on the NBC Sports Network talk show, The Crossover with Michelle Beadle. 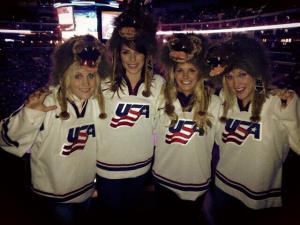 While Knight will be looking help end the United States gold-medal draught in women’s hockey at the Winter Games, she will also be part of another unique way to promote the Sochi Games. Following on the success of their trading card series which recognized athletes competing at London 2012, the Topps trading card company (known for their baseball cards) has immortalized Knight on cardboard.

Along with Lamoureux twins, the three shall be featured on their own trading cards in said set. Other Winter Games hopefuls and heroes that shall appear in the Sochi trading card set include Gracie Gold, Julia Mancuso and autographed cards of Mike Eruzione.

Quickly becoming the face of US women’s hockey (following in the steps of other legends like Cammi Granato and Angela Ruggiero), a gold medal would help to transform Knight into an American sporting hero.

Having already won a Clarkson Cup, IIHF Gold and an NCAA Frozen Four, Winter Games gold would provide her with a unique grand slam. Of note, the only other woman to have won all four was Jenny Schmidgall-Potter.

While the sporting world is catching up to the greatness that is Hilary Knight, she may become more than just a household name, but a glowing example of women proving that they too can become sporting heroes. After Sochi, there is no question that the next generation of young female hockey players may grow up wanting to be like Knight.