As the CWHL leadership continues to feature more women that once competed in the game, it is worth noting that among those helping to shape and grow the future; they once held the post of referee. Known affectionately by some as zebras, officiating may be one of the most thankless jobs in all of hockey, male or female. In addition to the physical demands, the concentration and thick skin needed make referees unsung heroes in the game.

League commissioner Brenda Andress has a strong background in officiating. A Level VI certified official with Hockey Canada (the highest ranking an official can achieve), she is qualified to officiate any National Championship event in Canada, along with any designated competition from the International Ice Hockey Federation.

When Andress attended the Hockey Canada Level VI Officiating Seminar in 2003 (held in Saskatoon); she was only one of four female referees from across Canada invited. Joining her was another woman who would make an impact in the nascent years of the CWHL.

Christine Pellerin, who once played with Angela James in the preceding COWHL, joined Andress at that seminar. An inductee in the Ontario Colleges Athletic Association Hall of Fame, she was a teammate of Geraldine Heaney for the 1987 OCAA champion Seneca College scouts. Like Andress, Pellerin was also a referee with the OHF. She would later have a prominent role as a ball hockey coach with Canada’s national program. Her mark on CWHL history was affirmed when she was one of the officials at the inaugural Clarkson Cup, held in Kingston, Ontario in 2009. 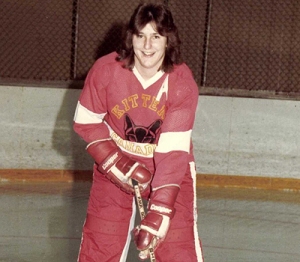 Heading into the 2013-14 season, Andress is not the only power broker in CWHL circles to hold the prestigious Level VI ranking. Chantal Champagne, general manager for the Alberta Hockey Club is another former official that is helping to provide the CWHL with a solid foundation in Western Canada.

With over a decade of experience as an official (she attended the Level VI seminar in 2001); Champagne holds many hats in sports. When she relocated to Calgary in 2005, she worked as a manager for the national ice sledge hockey team. Her work paid remarkable dividends as the squad captured gold at the 2006 Torino Paralympic Winter Games.

Currently pulling double duty as General Manager for the Calgary Ultimate Association, along with working to help Alberta qualify for the Clarkson Cup playoffs, her refereeing background is nothing short of impressive. At the 2001 Esso Nationals, Champagne was the referee for the gold medal game as Alberta defeated Quebec by a 1-0 tally. The top goaltender in that tournament was Kim St. Pierre, who would help Montreal win the first-ever Clarkson Cup in 2009.

Ironically, six degrees of separation would become a theme in Champagne’s officiating career. In November 2002, Champagne was on the golden stage once again as she was the official in the championship medal game of the Four Nations Cup.

With Canada defeating their arch-rival the United Stated by a 4-2 tally, Canada’s goaltender would cross paths again with Champagne in the future. Sami Jo Small, who stood between the pipes for the win, would be a co-founder of the CWHL. Of note, Small’s future husband, Billy Bridges would be on the gold medal squad in Torino that Chantal managed.

In summer 2005, Champagne officiated exhibition contests featuring the 2005-06 Under-22 Canadian National Women’s Team at Father David Bauer Arena. Several players that would be on the ice while Champagne donned the referee’s sweater and whistle would one day compete in the CWHL. Of note, two of the players would one day compete for her with the Alberta Hockey Club. Said players were Bobbi-Jo Slusar and Meaghan Mikkelson.

Current CWHL officials including the likes of Heather Richardson, Vanessa Stratton and Justine Todd offer the promise of a great future as women can have a relevant impact in hockey beyond playing. Like the women who play in the league, these referees bring a diverse background defined by a desire to succeed and a breadth of athletic skill, while bringing great acumen to the frozen perimeter.

Level IV certified Richardson, who is also employed as a branch manager and investment advisor with knowledge in Wealth Management, she recently officiated at the 2013 IIHF U18 Women’s World Championship qualifiers for Division I. She was also a lineswoman in the gold medal game of the 2010 Vancouver Winter Games. The following year, she was recognized at the PWHL 2010-11 Referee of the Year.

Justine Todd is from Ottawa and was an official in the 2013 Clarkson Cup postseason. She also officiates in the PWHL. In addition, Todd is providing strong leadership as the referee representative for the Ottawa District Women’s Hockey Referee Association. She was one of the lineswomen at the 2013 Canadian Interuniversity Sport women’s hockey championships which the Montreal Carabins grabbed.

Stratton is a personal trainer and skating instructor at Ryerson University who is part of the next generation of empowered female referees. Along with Richardson, they were both officials in the championship game of the 2013 Clarkson Cup.

A 2008 graduate of Brock University with a Bachelor’s Degree in Sport Mangagement, she was a member of the Badgers women’s hockey team. In addition to the 2013 Clarskon Cup, she was part of the officiating crew at the 2013 IIHF Under-18 Women’s Worlds and would also serve on the first all-female officiating crew for the World Ball Hockey Championships in 2013.

As part of the first all-female officiating crew for the ball hockey worlds. (Image obtained from: https://twitter.com/VanStratts/status/343825377669574656/photo/1)

As the impact of female referees continues to strengthen the women’s game, the aforementioned trio are part of the character and perseverance that is a building block for the CWHL. The mental toughness, work ethic and physical demands necessary to be a referee comprise a great leadership skill set that can lead to a prosperous future once the final whistle is blown. All one needs to do is observe the likes of past referees Andress, Champagne and Pellerin, and they will find the inspiration they seek.