With racing in her blood, French Canadian Maryeve Dufault is carrying in the proud tradition of other female race car drivers such as Danica Patrick and Jennifer Jo Cobb. Having started with motocross at four years old, she grew up with her father and brother racing motorcycles. Not uncommon for her, she has topped speeds of over 190 miles per hour.

A former Hawaiian Tropic model, Dufault was also one of Barker’s Beauties on The Price is Right. Winning the Miss Hawaiian Tropic Beauty Pageant in 2000 helped to finance her love of racing. Coming from a modest upbringing, it was not uncommon that she would show up at the track with a chassis that was several years old.

Initially, her exposure to race car driving started by racing karts and took part in the Rotax International Series. As her love of racing grew, she was involved with the Skip Barber Pro Series, the Formula Russell and the Pro Mazda Star Series, respectively.

Eventually, her talents would eventually lead to training opportunities with Formula 3 British and Formula Renault in China. Perhaps more impressive, this racing beauty had the honor of becoming the first driver to participate in the launch of the FAZZT IndyCar driver development program.

Her biggest breakthrough in racing came in August 2010 when she competed in a NASCAR Nationwide race. Held at the Circuit Gilles Villeneuve in Montreal, it was a fitting debut for the Quebec-born Dufault. Haililng from Sorel, the 29 year-old competed in the race as part of the Dodge Motorsports Program (in her No. 81 Dodge). History was made as she became the first Canadian woman to compete in any Nationwide race. The year was complemented by raising $10,000 for Breast Cancer research.

Also a competitor in the ARCA circuit, she was a Rookie of the Year candidate in 2011. The first oval race of her career would take part in ARCA as she qualified on her first attempt at the famed Daytona Speedway. She would finish the season ranked sixteenth overall although she missed a quarter of the races due to a lack of a sponsor. 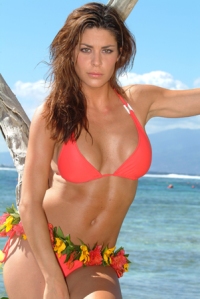 On April 18, 2011, she earned what racers call their golden finish; when the number of your car matches the place you finish. Competing for the Tony Marks Racing Team, the number 12 was adorned on her Dodge Charger, matching her twelfth-place finish at the 3 Amigos 250 at Talladega Superspeedway in Alabama. On the first lap alone, she managed to gain 14 positions.

That inaugural season in ARCA was nothing short of spectacular as she garnered six Top 13 finishes, one Top 10 nod and a pair of Hard Charger Awards. Not surprisingly, Speed Channel named her the Most Popular Driver.

Featured in Maxim and named one of Men’s Fitness magazines Top 10 Fittest Women in the World for 2011, Dufault must juggle her status as a sex symbol while competing in a male-dominated field. Although Dufault is worthy of her status as an elite driver (her hard work earned her a spot in the 2012 NASCAR Nationwide season), there are challenges that present themselves. Like Danica Patrick and other women before her, the usual banter of women not belonging on the race track has also plagued Dufault.

As a side note, she has also acknowledged that as other women are racing too, there is a feeling of competition between them. One in which many of the women do not talk to each other. Despite the icy feelings between some of the female drivers, she has acknowledged that Danica Patrick is friendly. Despite the crowded field, the growing number of female drivers is a sign of encouragement in the hopes that one day an entire racing league composed of female drivers could one day be reality.

In the meanwhile, her role in Canadian sports history cannot be disputed. Dufault is a remarkable ambassador for the sport and part of a growing number of role models for young women who are shattering the glass ceiling in traditionally male dominated fields.