Having established herself as the world’s finest at the 2011 Ski Cross World Championships, Kelsey Serwa is looking for Winter Games gold to complement her triumph. A member of Canada’s National Ski Cross team, the 24 yaer-old is one of the emotional favorites heading into Sochi 2014. 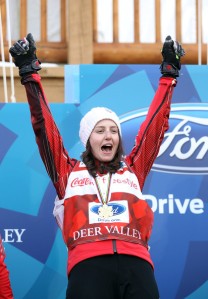 A native of Kelowna, British Columbia, skiing was in her blood. In the early 1960’s, her grandfather Cliff Serwa was a co-founder of the Big White Ski Resort. It was evident that Serwa would become a skiing prodigy. Having trained in fog, soft snow and other unusual weather conditions, it would only make her better prepared to succeed. Starting at the age of six, her hard work and determination would lead to a spot on the Canadian Women’s National Development Team in 2007.

In 2009, she would go from alpine racing to a more extreme version of the sport – ski cross. The change would result in superstardom. To date, she has earned over a dozen World Cup podium finishes. Despite such success, Winter Games gold has eluded her. Competing on home soil at the 2010 Vancouver Winter Games, she would finish in fifth.

Another obstacle would present itself two years later. After suffering a devastating knee injury in January 2012 at a World Cup race in the Alpe d’Huez resort in France, it was a long and agonizing recovery for Serwa. Before the injury, she had already won the first two World Cup races of the 2011-12 season. Despite being a World Champion, X-Games gold medalist, National Champion, and two-time South American Champion, Serwa needs to show her critics is tough enough to become a champion again.

Sadlly, she suffered another setback in Myrkdalen, Norway on March 10, 2013. With a torn ACL in her left knee, she became a victim of what many competitors believe to be a chronic problem of poorly designed and built courses. The ski on her left leg caught an edge on what seemed to be a perfect jump. Prior to the injury, victories in San Candido, Italy and in Sochi were part of her strong start to the season.

The win in Sochi was enriched by the fact that she resisted a pair of pass attempts by Switzerland’s Fanny Smith, Considering that Ashleigh McIvor (whom Serwa beat for a national title in 2009) and Julia Murray retired from the sport due to knee injuries, Canadian sports fans do not want to see Serwa walk away from the sport too.

Featured in Sportsnet Magazine’s 2013 edition of the Beauty of Sport. Photo by Matt Barnes, image from: http://www.sportsnet.ca/the-beauty-of-sport/#section=25

Anyone that wants to write off Serwa is making a serious error in judgement. The 2011 X-Games title was claimed a week after suffering injuries to her back and ribs in a painful crash. It was part of a season in which she swept the two biggest ski cross events in the world.

In addition to her training in Oregon, Serwa also juggles academic obligations. Studying from a breadth of courses such as anatomy, physiology and psychology at Okanagan College, she is working towards a degree in physiotherapy. Not one to wallow in self-pity, her hard work sets an example for so many other young athletes who have doubts or lack confidence.

A big part of the momentum for Serwa’s comeback will also take place on November 11 at The Hot Box Yoga in her hometown of Kelowna. A fundraiser yoga class, the proceeds shall go towards Canfund. As Serwa works towards the elusive Winter Games gold medal that would not only complete her storied career, but solidify her legacy as one of Canada’s greatest in ski cross, it is a kind gesture.

With a race on December 7, 2013 in Nakiska, Alberta, Canada, it is one of eight races on the road to Sochi. Hopefully, it shall prove to be the race that leads Serwa towards a golden redemption in Sochi. Should it happen, it would be the culmination to a remarkable story that not even a Hollywood filmmaker could think of. Regardless of the outcome, she is the embodiment of the character that defines so many Canadian athletes. On toughness alone, she is a role model for young female athletes.