In the last twelve months, Digit Murphy has had a remarkable series of moments that shall provide a lifetime of memories while strengthening her legacy. From being recognized by Brown University in their famed portrait gallery to becoming the first American-born coach to garner Canadian Women’s Hockey League Coach of the Year honors, such accomplishments were complemented by Murphy grabbing her first-ever championship as an elite coach; the coveted Clarkson Cup. 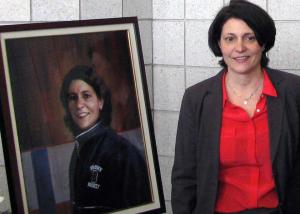 Murphy at the unveiling of her portrait unveiled and placed in the Brown Hockey Legends gallery at Meehan Auditorium. (Image obtained from Facebook)

As 2014 begins, Murphy is the proud recipient of another remarkable accolade. Bestowed the honor of the American Hockey Coaches Association’s Women’s Ice Hockey Founders Award, it is testament to her skills as a remarkable teacher of the sport. The award shall be given to Murphy, only the fifth female hockey coach to be honored, during the AHCA’s Celebration of Women’s Hockey in Naples, Florida on May 2.

As a long-time member of the AHCA, the association (formed in May of 1947) has expanded to include coaches at the professional, junior and high school levels as well as college. Open to both men and women, the group is devoted to maintaining the highest possible standards in the game. 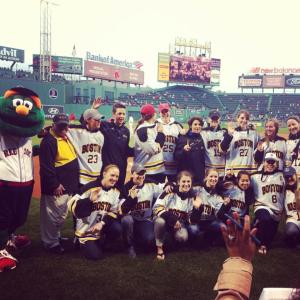 Murphy flashing the peace sign as the Blades are honored by the Red Sox at historic Fenway Park. (Image obtained from Facebook)

The award recognizes the individual’s growth and development of the sport in the United States, it is a worthy prize for an individual who has coached for nearly three decades. In addition, Murphy has also had a tremendous impact in helping the sport grow internationally. Of note, she is part of the IIHF Mentorship Program, serving as a coaching consultant for the Slovakian national women’s team.

Kauth would become a co-founder of the CWHL, the league Murphy currently calls home. Kellar, a former CWHL competitor, was the first Canadian defender to appear in four consecutive Winter Games competitions. King has proudly followed in Murphy’s coaching footsteps, having turned Boston College into a perennial contender.

Although her coaching acumen stretches over several generations, no legacy may generate as much pride as her daughters. They have also followed in her footsteps as players (Murphy was an elite scorer for Cornell University). Her daughters would be part of the inaugural Rhode Island state championship team in 2002.

She has had a positive impact on the lives of the young women that have played for her at all levels of the game. The legacy that she built at Brown University, and the new one she is crafting with the Boston Blades, not only makes her worthy of consideration for the United States Hockey Hall of Fame but the coveted Hockey Hall in Toronto.