Having competed in the luge since 2002, Alex Gough is looking for a golden performance at the 2014 Sochi Winter Games. Should it happen, it would mark a breakthrough as no Canadian female has ever gained the gold in that event. 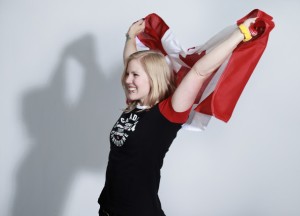 The 26 year-old native of Calgary and National Sport School alum is no stranger to making Canadian sporting history. At the 2011 FIL World Luge Championships in Cesana, she became the first Canadian female to earn a podium finish. In addition, a February 12, 2011 victory on the World Cup circuit made her the first non-German to claim first in thirteen years.

Gough will also be part of another unique chapter at Sochi. The team relay shall be contested for the first time at Sochi 2014. Her teammates for the event include Sam Edney and the established doubles team of Tristan Walker and Justin Smith. The group has proven success as a silver medal was gained at the 2013 World Championships, complementing their bronze in 2012.

Of note, Edney is a longtime friend of Gough. Family trips to Fernie, British Columbia resulted in an encounter with Edney where the two would ski the slopes. It was Edney’s foray into the sport that would encourage Gough. Registering for a luge camp at Canada Olympic Park at the tender age of 13, Gough would qualify for the 2006 Torino Winter Games at 18.

While some of Gough’s eccentricities include a love of knitting, the Olympic rings tattooed on the back of her right ankle and the constant traveling with the stuffed Disney character Stitch, she also has a charitable side. Proudly involved with the charity Fast and Female, she is working to help promote and encourage the involvement of sport among girls.

While she has had the opportunity to compete on home soil during the 2010 Vancouver Winter Games, her best performance ranked her in 18th place. Enjoying the opportunity to train at the Whistler Sliding Centre track, she entered the competition with confidence but the untimely accident involving Georgian Nodar Kumaritashvili lowered the start positions, resulting in a different feel on the track.

Despite the heartbreak of Vancouver, it would serve as a valuable learning experience. On February 12, 2011, she was the first non-German athlete to win a World Cup race in thirteen years. Snapping a 105-race winning for the Germans, it also made her the first Canadian female to win on the circuit.

During the last three seasons, consistency has defined her game as she has finished no worse than fifth place in the World Cup standings. Although 2012 resulted in a fourth place ranking, she would bounce back in 2013 with a second bronze medal.