An opportunity to appear in the second season of The Amazing Race Canada continues to solidify Natalie Spooner’s standing as one of the rising stars in women’s hockey. Teaming up with second-generation player Meaghan Mikkelson (who has been featured in Sports Illustrated and Sportsnet Magazine), the two are a dazzling duo, making their Hockey Canada and CWHL teammates very proud.

With the debut of the second season resulting in Spooner and Mikkelson winning the first leg of the race, hockey fans were hoping they could maintain their winning momentum for the second leg. Adding to the anticipation was the opportunity to attend a viewing party for Team Natalie and Meaghan and watch the second episode (titled “I kissed a fish”).

Held at Real Sports, a popular locale in Toronto’s Maple Leaf Square, fans also had the chance to meet Spooner, resulting in a Tuesday evening to remember for many hockey fans. 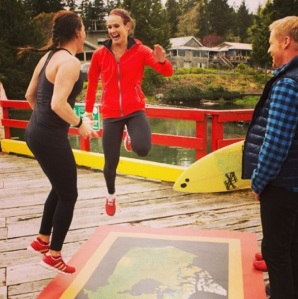 Taking into account that several of her past and present Toronto Furies teammates were also on hand to show their support, there was a great feeling of team spirit and friendship. Among the Furies on hand were the likes of Deirdre Norman (Furies game day planner), Karolina Urban (who was part of the Furies’ 2012-13 rookie class with Spooner) and fellow Clarkson Cup champions Kori Cheverie and Lisa Mullan.

Viewers on hand for the event were treated to a remarkable comeback by these empowering women. Akin to the emotional dramatics at the gold medal game of the 2014 Sochi Winter Games, Spooner and Mikkelson pulled off another miraculous triumph.

As the winner of the first leg of the race, they earned the privilege of departing first on therace’s second leg. Departing at 4:18 am, the second leg took them from Victoria to Tofino, British Columbia. Upon arrival at the Long Beach Airport, the first group of racers (which included the top three finishers from the first leg of the race) utilized a Chevrolet Volt to arrive at a fish processing plant for a race Detour.

In what was possibly the most exhausting challenge yet, teams had to opt between “sharp knives or sharp eyes” as teams could sort fish in numerous containers or attempt to filet to 30 pounds of fish. Spooner and Mikkelson were among a group of frustrated competitors who were facing challenges properly sorting the fish. It would result in the second group of racers (the fourth to sixth place finishers in the race’s first leg) to catch up.

Facing fourth place, Spooner and Mikkelson opted for cutting up the fish instead. This would prove to be a very effective strategy. Advancing to the next part of the race at North Chesterman Beach, smart strategy would once again define the comeback.

One competitor from each team had to endure the waves of the Pacific and stand on a surfboard for three seconds. Despite her best efforts, Spooner was mercilessly knocked over by the waves. Opting to replace her, Mikkelson stepped in and pulled it off on the first try.

Suddenly, the rest of the competitors could not gloat that they were ahead of the Olympians. As the final part of the race involved creating a Tofino beach chair out of fishing nets and driftwood, it would prove to be a stumbling block for many teams.

Within a matter of seconds, Spooner constructed the chair and the tester was able to sit in the chair without it breaking. It resulted in many friends commenting on social media that Spooner must have been a Girl Scout.

Running towards the finish, Mikkelson would leapfrog over Spooner to land on the Pit Spot that signified they won their second consecutive leg on the race. The result was a group of very relieved yet excited fans at the viewing party. For their victory in the second leg, each earned another $2000 on their Scotiabank Gold Card and a vacation to Hong Kong. Considering that the third leg of the race sees all competitors competing in Hong Kong, it will certainly help them prepare for when they take their vacation.

As a side note, the Furies commented on social media how they were in fourth place heading into the Clarkson Cup playoffs. Despite the low seeding, they would pull off a dramatic Cup victory, showing the coincidence between both fourth place standings.

Gracefully thanking everyone on social media for attending the viewing party, a jubilant Spooner announced that the next viewing party shall take place on July 29. It is certainly mandatory viewing for both hockey fans and Amazing Race fans.