In her senior season with the University of Oklahoma, Lauren Chamberlain rewrote the NCAA’s women’s softball record books. With a grand slam factoring in a 6-2 triumph on April 30 over North Texas. Breaking the all-time home run record with 91, Chamberlain hit the historic home run against pitcher Kenzie Grimes. Of note, the previous record (set by UCLA’s Stacey Nuveman) lasted for 13 years.

Chamberlain’s heroics contributed to the Sooners finishing the 2015 regular season with a sterling 45-7 record (going 14-2 in conference play), while clinching their fourth consecutive Big 12 championship. It was part of an impressive season where Oklahoma’s offense scored 487 runs and slugged a total of 107 home runs. 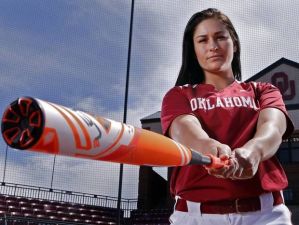 Through the first 53 games of the NCAA season, the 2012 Big 12 Freshman of the Year (and three-time All-America nod) hit an astounding .403, complemented by 20 home runs. By season’s end, she was able to maintain this remarkable display of hitting, finishing her career as the new NCAA record holder in slugging. Setting the new standard of excellence with a slugging mark of .957, it only added to her legacy as one of the greatest NCAA softball players of the decade.

Along with fellow senior Shelby Pendley, both were among the Top 10 finalists for the 2015 USA Softball Collegiate Player of the Year Award. The only other program to have more than one finalist was the University of Florida Gators. Chamberlain’s 254 career RBI’s place her ninth all-time, while Pendley stands seventh with 269. As a side note, Chamberlain and Pendley became the first teammates in collegiate history to be selected with the first two picks of the NPF Draft. 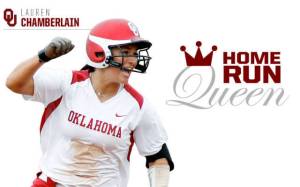 Statistically. Chamberlain’s 1.32 runs per game and 1.20 walks per game ranked second overall in NCAA play. Her slugging percentage placed her fifth in the nation, while her on-base percentage was good enough for sixth, respectively. In addition, she recorded 66 runs scored, 60 walks and a .602 On-Base Percentage, which paced all players on the Sooners. Her .398 batting average was part of a sparkling statistical campaign. Ranking second to Pendley in most stats, Chamberlain managed a solid season that saw her notch 10 doubles, four triples, 19 home runs, eight stolen bases and a .984 slugging percentage.

Tuscaloosa, Alabama would prove to be the end of Chamberlain’s record-breaking career in a heartbreaking 5-3 loss at the Alabama Super Regionals. Losing to the sixth ranked Alabama Crimson Tide, Chamberlain contributed a pair of home runs. The momentum of the game had changed once Alabama slugger Marisa Runyon hit a grand slam in the bottom of the sixth inning. Chamberlain’s pair of home runs elevated her to 95 all-time, while her slugging percentage of .960 also stands as an NCAA record. Her 272 career runs scored places her fifth all-time.

Having established herself as a female sporting legend in Oklahoma, Chamberlain was recognized on the House and Senate floors at the State Capitol. One of the most accomplished college softball players ever, this home run queen is destined the one day don the United States national team jersey, extending her proud career and allowing a larger fan base to appreciate her remarkable athletic gifts.