As the Montreal Stars look to capture their first Clarkson Cup since 2012, a former star player with the McGill Martlets may be the final piece of the puzzle. With 12 players from the 2014-15 Stars roster not returning, Peroff brings two very valuable elements to the club.

In addition to having already won a Clarkson Cup championship (with the Toronto Furies in 2014), Peroff enjoyed a stellar university career with Montreal’s McGill Martlets. In five sensational seasons with the Martlets, Peroff participated in five Canadian Interuniversity Sport national championship tournaments.

Although Peroff did not find her scoring stride with the Furies (traditionally, they have always been an offensively starved team, her positive attitude did not wane. Known as a social butterfly, Peroff tends to be a popular player and teammate wherever she plays.

Raised north of Toronto in Keswick, Ontario, a municipality in York Region, Peroff was part of several key events in Furies franchise history. Of note, she played with the club at Air Canada Centre in November 2013, which was the first CWHL regular season game played in an NHL arena.

In addition, she would help the club capture its first-ever Clarkson Cup, an emotional 1-0 overtime win against the Boston Blades. Adding to Peroff’s jubilation was the fact that the victory came in Markham, Ontario, also part of York Region, making the win feel like it was literally in her own back yard.

Making her CWHL debut on October 20, 2012, it resulted in a winning start as the Furies prevailed by a 4-3 tally against Brampton. Appearing in 20 games, she only logged two penalty minutes, showing strong discipline.

In the opening match of her second season (2013-14), a November 9 contest against the Calgary Inferno, Peroff logged her first career goal. Of note, it was a memorable goal providing her with a special milestone. Peroff would log the game-winning tally as the Furies prevailed by a 3-2 count against the visiting Inferno.

By season’s end, she would log assists in a pair of losses to Montreal (February 15) and Brampton (March 9). Ironically, the loss against Brampton represented the only game all season in which Peroff had a positive plus/minus rating (+2).

With only six penalty minutes in more than 40 career games played at the CWHL level, her remarkable discipline reflects a great style of play that should enable her the chance to make an impact with the Stars.
With the blue and white, Peroff’s role occupied more of a forechecking capacity, proving that preventing goals comprises a key role. Paying attention to such details is just as important as a teammate that may have scored a goal on the opposite end of the ice.

Competing with the Stars, it is highly likely that Peroff shall establish new bench marks for most goals and points in one season during her CWHL career. Reunited with the likes of Martlet teammates such as Ann-Sophie Bettez (a BLG Award winner), former captain Cathy Chartrand, 2015 second round pick Katia Clement-Heydra and All-World goaltender Charline Labonte, there are strong feelings of familiarity and pride on this year’s edition of the Stars.

In Montreal hockey circles, it had only been one year earlier (2011), when Peroff solidified her legacy. Leading the Martlets to a victory over the highly talented St. Francis Xavier X-Women in the 2011 CIS national title game, Peroff assembled a solid two-point performance that set the tone for the remainder of the game. For her efforts, she was recognized as tournament MVP, a remarkable milestone in her fabled career.

Graduating with 139 career points with the Martlets, Peroff was also an alternate captain for three seasons. Her leadership followed later in her career. Having also dressed the shirt of Macedonian Suns in the Canadian Multicultural Hockey League, she acquired the 2013 MVP award.

Although Peroff was not part of CWHL play during the 2014-15, she was equally prominent. Competing with the Italian club, the Bolzano Eagles, she participated in Group G of the Euorpean Women’s Champions Cup. Playing alongside Chelsea Furlani during the season, Peroff logged a pair of assists in a 7-3 final on December 6 against the Espoo Blues. 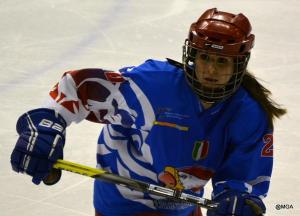 During the 2014-15 EWHL season, Peroff was one of seven Canadians competing in the league. She was joined by the likes of Alex Gowie (KHM Budapest), blueliner Regan Boulton (EHV Sabres Vienna) and Abygail Laking (DEC Salzburg Eagles). Of note, the Neuberg Highlanders featured the most Canadians of any European roster. Consisting of three players, including scoring champion Devon Skeats, forwards Shelby Ballendine and Paula Lagamba completed the Canadian trio.

With a very strong roster this season, Peroff may likely be a third line player with the Stars, but her talents give her the potential to be remarkably effective, giving the Stars solid depth. Possessing an impressive skill set, she also has the ability to occasionally shift to a second or first line, showing versatility. Possessing championship experience, Peroff not only knows what it takes to win a Clarkson Cup, her positive attitude and team first approach make her an ideal teammate.