As the accolades and gratitude continue to grow for NWHL founder and Commissioner Dani Rylan, all are well deserved. Having revolutionized women’s hockey by introducing player compensation, the first of its kind in North America, Rylan is forging an empowering path forward.

Such effort alone is not the only reason that Rylan is gaining unprecedented recognition on The Hockey News list of the 100 Most Influential and Powerful People in Hockey, which also included NWHL competitor Kelli Stack being named. The reality is that Rylan’s efforts in the game have gone beyond just compensation. 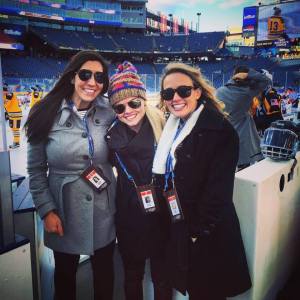 While the NWHL gained prominent attention in the media as the first of its kind to pay players, it has proven to be only the initial step in Rylan’s effort to create the finest hockey league for eilte female competitors. The hard work has continued past the inaugural puck drop.

Equally important is the need to give back to the community, establishing the league and its players as hockey humanitarians, a cause that Rylan was very passionate about when she helped to form the NWHL Foundation. Such initiative was met with outstanding results.

From fundraisers for military, cancer research, the admirable Do It for Daron mental health foundation, along with teams locally holding food drives and teddy bear toss events (for needy children during the holidays), one quickly gains the impression that the players enjoy participating in these events, truly a win-win for the game and the community.

Exhibition series have also proven to be another outstanding method of developing the game, while acknowledging the efforts of others in the hockey community. Rylan invited the Minnesota Whitecaps, the first American-based team to win the Clarkson Cup, to participate in a pair of pre-season exhibition matches with the New York Riveters and Connecticut Whale.

Before the holidays, the Boston Pride would visit the Whitecaps at their home rink, providing Minnesota, also known as the state of hockey, with the first professional women’s hockey matches there. Ensuring that the Whitecaps were somehow part of the NWHL’s inaugural season is testament to Rylan’s respect for those who paved the way.

Another key highlight was the opportunity to land the league’s first corporate sponsor, Dunkin’ Donuts, an encouraging sign that the league is destined for growth. With the Dunkin’ Donuts logo featured on all NWHL jerseys, the names of the players on the back of said jerseys are nothing short of impressive.

Featuring world class talent, including an exceptional number of competitors from the United States national team, it injected instant credibility to the league. Rylan’s strong leadership has led to a credible reciprocation, one where players are given percentages of jersey sales. Such sales could grow as the league has enjoyed television exposure on the New England Sports Network and ESPN3, part of the expanding interest that the league has enjoyed.

The reality is that Rylan has brought more exposure and generated unprecedented interest in women’s hockey over the last six months than some people have managed in close to a decade. It can also be said that without Rylan and the presence of the NWHL, there would never have been a women’s outdoor game at the Winter Classic.

In addition, Rylan has been highly supportive of the formation of a player’s association. Led by Winter Games silver medalist and former Wisconsin Badgers scoring legend Erika Lawler, it is part of a commitment to build and develop player morale, part of proficiency for not only doing all the right things, but respecting the athletes who are equally committed to developing the NWHL brand.

Such mutual respect has proven to be among the ingredients towards a very successful future that should see Rylan, and hopefully other members of the NWHL family, as fixtures on the Top 100 for many seasons to come.