Heading into the Seattle Mist’s 2014 campaign, the proud indoor football franchise welcomed several new faces. In addition to five members from the British Columbia Angels getting onboard, featuring the sensational Smash Sisters of Stevi Schnoor and Deanna Schaper-Kotter, another new face breathed new life into the exciting franchise.

At 35 years young, Kasey Carter brought more than just a love of football to the gridiron. Her enthusiasm and determination set a positive example, proving to be one of the most inspiring rookies in league play this season. Showing that age is nothing more than a state of mind, Carter contributed to a Mist franchise that boasts one of the best team cultures in women’s football. 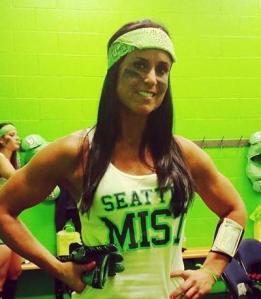 Perhaps more impressive is the fact that Carter, who is employed as a nurse in ED, is also a mother. Joining the likes of fellow teammates (and mothers), Jessica Hopkins, second-generation football player Angela Rypien and quarterback Mary-Anne Hanson, who led the BC Angels to a championship in 2012, juggling family and football is a remarkable example of the empowerment that helps define all women’s sports.

Employing social media as a way of connecting with fans, it has added a special dimension to Carter’s rookie campaign. One of the most heartwarming aspects of her social media journey was a video she uploaded, where she is playing with her daughter. For many generations, a backyard scrimmage was traditionally reserved for father and son. Introducing her daughter to the game, it is part of a bold era in the game’s growth, proving that the future of football equally belongs to women.

Although Carter was relegated to the bench during the regular season, it did not diminish her role with the team. Of note, she was one of many proud Mist players that took part in the charity softball tournament of Super Bowl XLVIII Most Valuable Player (and Seattle Seahawks member) Malcolm Smith. While backup duties can be a difficult aspect for rookies and veterans alike, Carter showed great maturity and patience, the hallmark of a true team player. With the Mist having qualified for a postseason berth, hope was not yet lost for Carter to grace the gridiron. Making a tackle in a visceral postseason loss to the rival Los Angeles Temptation, it was a time of great elation and validation for the inspiring rookie. Should she decide to continue and pursue her football dream, her perseverance stands as a shining beacon to never stop believing.