With a school that has produced the likes of Tiger Woods, Andrew Luck and Sami Jo Small; Kate Courtney can now add her name to the proud athletic legacy of Stanford University. As a freshman, she grabbed two Division I titles in mountain biking.

Considering the 2013 collegiate mountain bike nationals were held across the country in Beech Mountain, North Carolina, the native of Kentfield, California made an impression. The fresh-faced teen grabbed titles in the cross-country and short track segments. 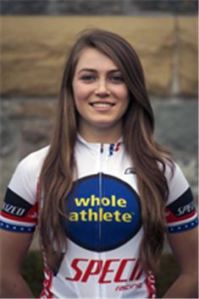 Perhaps more impressive was that she won the same events in July 2013 at age group nationals. The event was held in Macungie, Pennsylvania and her double win would foreshadow the greatness to come.

Having already competed for the United States at the international level, she would grab first place at the Pan American championships in Argentina. Of note, she would compete at the UCI world championships in South Africa. Competing in the junior cross-country race, she would earn a sixth place finish.

One year prior, the phenom established herself on the World Cup circuit. A pair of top ten finishes in the Czech Republic and Quebec, Canada was complemented by a first-place in Windham, New York. Being able to compete at a world class field at such a young age is testament to her talent. A member of the Whole Athlete racing team since she was 14, biking became a way to bond with her father.

Definitely on the radar of USA Cylcing, she would win their 2010 Mountain Bike Cross-Country Nationals, the technical and travel aspects of competing will be refined with the guidance of quality coaches such as Marc Gullickson. Perhaps the most admirable quality of this prodigious cyclist is the fact that she also conducts volunteer work in a mentoring role with younger riders.

Having added weight training as a means to improve in the sprints which begin the races, collegiate cycling should provide her with ample training partners. After the tragic controversies that tarnished the legendary Lance Armstrong’s cycling career, Courtney is helping to add a bright light to a sport on the rise in America.

With the opportunity to hone her already impressive skills at Stanford, she has the potential to be one of the most talented and accomplished female student-athletes the school has produced. Before she graduates, the possibility of seeing Courtney competing in mountain bike events at the 2016 Summer Games in Rio is highly possible.