Nikki Johnson first came to the attention of sports fans in 2008 when she appeared at the Women’s Football Camp and Conference in Las Vegas. Still a student at Silverado High School, she was already carving her legacy in football.

Playing in the inaugural season of the Las Vegas Sin, Johnson was nominated as the Rookie of the Year, MVP and Offensive Player of the Year. A second-team All-America selection with the Women’s Football Alliance, she earned the nod as a wide receiver, testament to her talent.

Having played against the boys as a child, Johnson was moved when she saw Sam Gordon, a 9 year-old girl from Utah rush for over 1,900 yards in the Ute Conference in 2012. Johnson even wrote her a letter of inspiration, indicating how she impressed she was with her play.

Represented by the SMWW Agency, Johnson is a sports model, motivational speaker and broadcaster.
An ambassador for the LFL, she is truly one of its gems. Having represented the league in All-Star games in Mexico and Australia, with a sparkling time of 4.8 in the 40-yard dash. 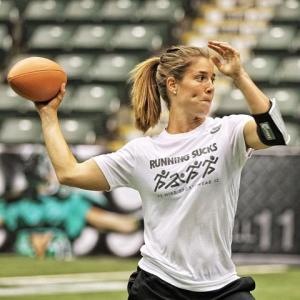 Championing the worthy cause of having girl’s flag football earning the status of a sanctioned sport in the state, she would speak about its benefits at the conference mentioning that recreational flag football leagues for girls had nearly 2000 participants in Southern Nevada. Emphasizing the importance of giving girls a place to learn the game at an earlier age level, Johnson even set up a program to help establish the growth of the sport in her school district.

Although the Clark County School District in Nevada mentioned girl’s flag football would be classified as a club sport for 36 high schools in 2009, the desired result came in 2012. Following in the footsteps of Florida, Alaska and several regions of Canada and Mexico, the Nevada Interscholastic Activities Association would sanction the sport.

During that time frame, Johnson was also one of 10 young women that were chosen to help promote girls flag football for the National Football League. It would mark the beginning of a fruitful relationship with the league. From encouraging women to contact her so that she could put them in touch with proper NFL channels to get women’s football started in their area, she would also serve an internship with NFL Films in Mount Laurel, New Jersey. In addition, she would contribute to NFL Matchup, a weekly show featuring Ron Jaworski and Merril Hoge, as a production assistant gathering stats and researching facts.

In women’s tackle football, Johnson participated in the Women’s Football Alliance with the Las Vegas Showgirlz. Competing at the Wide Receiver position, Johnson would emerge as the squad’s receiving leader in 2010. Several of her Sin teammates also made their mark with the Showgirlz; Yevette Tanner, Jennifer Cowan and Mia Chambers (who was tackled in LFL play by a drunken fan). Of note, Johnson would also play with another WFA squad, the Silver State Legacy.

Perhaps more impressive was the fact that an NFL Films crew followeed Nikki and her Showgirlz teammates, including a workout session at Van Hook Sports Performance, highlighting the growth of the women’s game. As a side note, former pop culture icon Robin Leach contributes to the Las Vegas Sun and is one of Johnson’s biggest fans, having frequently covered her storied career. 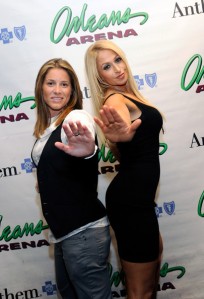 Her importance and value to her team is the equivalent of Peyton Manning in men’s football. Heading into the 2013 campaign, Las Vegas head coach Jeremiah Captain praised her talents to the Las Vegas Sun, calling her an accurate passer who could make any throw on the field. While Las Vegas has attractions such as Celine Dion and Britney Spears, Johnson and her superlative displays of football talent are every bit worthy of being a headliner as well.

A see-saw battle against the Green Bay Chill at Orleans Arena would help to solidify Johnson’s status as one of the league’s premier pivots. With both clubs fighting for a postseason berth, fans expected a shoot-out between Johnson and elite quarterback Anne “Showtime” Erler.

For fans of LFL Canada, this was just the continuation of a very intense rivalry between the two. During the inaugural season of the Canadian version of the sport, Johnson was named starting quarterback and eventually became offensive co-ordinator for the Regina Rage. Erler would earn the starting job with the Saskatoon Sirens, setting the stage for the football mad province of Saskatchewan to witness women’s football at its finest. Their rivalry would reach its summit during the last game of the Canadian season as the winner would advance to the LFL Canada championship. 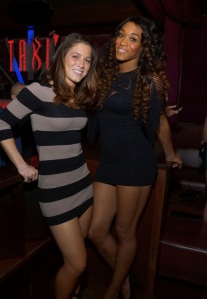 With Cassandra Strickland at a 2013 Super Bowl weekend party at Tabu night club. (Photo by Cashman Photos: Obtained from http://www.vegasnews.com/89248/ladies-of-legends-football-league-party-at-tabu.html)

The match between Green Bay and Las Vegas would go down as one of the most exciting and historic in league history. With Erler and wide receiver Anna Heasman leading the league in passing and receiving, Johnson made perfect use of her weapons on offense, including Carmen Bourseau, Kelly Schroeder, Stephany Pearls and Danika Brace.

In a game where the lead changed eight times, Heasman would finish the game with an LFL record five receiving touchdowns. Despite the record, Johnson would steal the show by registering four touchdown passes and a 35-yard touchdown run. Her run provided the Sun with a 32-26 lead. After Erler tied the score, Johnson did not disappoint the hometown crowd. A 5-play, 35-yard drive saw Johnson pick apart the Chill defense with a 4-yard pass to Maddie McCoy proving to be the game-winning TD pass.

During the 2013 LFL season, Johnson fifth among all competitors in rushing with 213 yards, averaging 7.1 yards per carry while earning All-Fantasy honors. Her 213 yard output accounted for 47 percent of the Sin’s rushing attack. In terms of passing, Johnson finished among the top five in the league with 309 passing yards and eight touchdown passes. She was also one of the nominees for the LFL’s Offensive Player of the Year Award.

Such a strong presence at the quarterback position was essential in the Sin earning the second highest rushing in the league with an average of 185.3 yards per game. Johnson was also a key factor in Kelley Schroeder blossoming into a deep threat as she finished her campaign ranking as the fifth-best receiver in the league.

Returning to the tangent of LFL Canada, if fans conduct an internet search on Nikki Johnson, they will likely find her hit on Toronto Triumph defender Devine Burton constituting most of the top search results. Named as one of the Top 10 plays of the year on ESPN Sports Center, the play consisted of Johnson on her way towards scoring a rushing touchdown, she drops her shoulder, sending a powerful message to anyone that tries to stand in her way.

While the hit against Burton is a viral video, the reality is that the game possessed some of that typical Johnson magic. Defeating the Triumph by a 40-32 score, Johnson was named Player of the Game. Perhaps more impressive is the fact that after 48 minutes of smash mouth football, she was part of a post-game autograph session, with an ice pack on her right wrist. A true display of character and dedication to her fans. 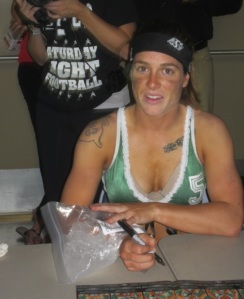 Showing great loyalty to her fans. Signing an autograph after a Regina Rage win while sporting an ice pack on her right wrist. (Image obtained from: http://www.prairiedogmag.com/what-it-was-was-girl-on-girl-football-rosies-live-blog-of-the-regina-rage%E2%80%99s-inaugural-game/)

Her presence certainly added a major league feel to LFL Canada. She would finish second in the league in four categories, including passing yardage, touchdown passes, rushing yards and rushing touchdowns, respectively.

While it is easy to look on the surface and see the beauty that Johnson and her colleagues from the LFL possess, the most revealing element is their dedication and athleticism. From her role as a women’s sports activist and a Title IX champion, Johnson is one of the modern day builders for women’s football in Nevada. With the goal of working in operations for an NFL team or with an apparel company, Johnson would be a tremendous asset. Although words such as beautiful, elegant and sophisticated may describe Johnson, durable, resilient and talented are equally fitting. A remarkable person during an exceptional period of growth for women in sports, a day may come when fans will boast about having had the chance to see her play, the way those today speak about Johnny Unitas and Joe Montana.