While there is no denying that Lexi Thompson’s appearance on the cover of the May 2015 edition of Golf Digest has generated a lot of interest and attention, to call her appearance controversial may border on exaggeration. Upon hearing the news that she was “topless” on the cover, it would have been for someone who had not yet seen the cover to interpret said cover as such.

The reality is that she is adorned in a towel, draped around her neck, with each end covering the essential areas of her exposed breasts. Taking into account that since 2009, male and female athletes have appeared on the covers of ESPN Magazine’s Body Issue in a complete state of undress, those covers could easily be considered as more controversial than Thompson’s cover. 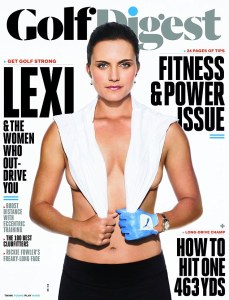 Of course, there are elements of the cover, part of its Annual Power and Fitness Issue that may be considered shocking. Although Paulina Gretzky appeared on the cover last year, there has never been a female athlete to grace its cover in the same method as Thompson.

Photographed by legendary sports shutterbug Walter Iooss, Jr. (who has photographed many models in various states of undress for the Sports Illustrated Swimsuit Issue), Thompson’s mother Judy was on-hand during the closed set shoot.

Thompson is among one of the brightest stars in the LPGA (such as Stacy Lewis, Cheyenne Woods and Michelle Wie) who share their workouts in the edition of Golf Digest. As women on the LPGA are able to outdrive the average 30 year old male by 20 yards, swinging like a girl is definitely the next big trend in golf.

Page 100 shows a dressed Thompson donning boxing gloves, pounding her strength into a bag. Declaring that a day feels weird if she does not work out, she wants a punching bag installed in her next house. Using boxing as a means of getting power with the whole body, it signifies how many athletes are using non-traditional workout methods to bring the most out of their athletic performances.

Editor Jerry Tarde writes in the magazine’s interior that Thompson’s cover displays a confidence and self assurance, which cannot be disputed. Perhaps the day will come when other female golfers shall grace the cover of the magazine in a similar fashion, resulting in malaise rather than controversy (similar to the pregnant celebrities that mimic Demi Moore’s cover from Vanity Fair in 1991).

Perhaps the point of tension is that fact that Thompson has been a significant part of the golf community since she was 12 years old. Her topless appearance on the cover of Golf Digest is a bold statement about her growing up, representing a new chapter in her career and her life. Currently 20, she is shedding the girl next door image that defined the first few years of her career.

There is no question that sex appeal has become an element in feminine golf. Since Natalie Gulbis set hearts pounding with her infamous yet popular swimsuit calendars, others have followed. Paula Creamer is not afraid to flaunt her long, statuesque legs, showing a confidence that may not have existed a generation ago. In addition, Belen Mozo has appeared in ESPN’s Body Issue, while appearing on annual lists online of the most attractive women in golf. Thompson has now crossed over into that realm, while not forgetting to be confident and empowered, making it par for the course.

One of the greatest forums to recognize female sports excellence, the 2014 edition of the ESPY Awards delivered again. With the red carpet filled with some of the biggest (and most beautiful) names in female sport, such as Danica Patrick and Hilary Knight, it had all the elegance and allure of the Academy Awards in an evening that celebrated some remarkable women. 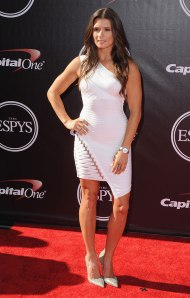 Fan favorite Maria Sharapova may have been the most notable female athlete to gain an award, earning Best Female Tennis Player honors. Jamie Anderson, who also appears in the 2014 ESPN Body Issue took home the Female Action Sports Athlete Award. Of note, Anderson would emerge as the only female athlete to win two ESPY Awards. Beating out Maddie Bowman, Kelly Clark, Vicki Golden and Carissa Moore for the Best Female Action Sports Athlete award, she was also the winner of the Best Female US Olympic Athlete. 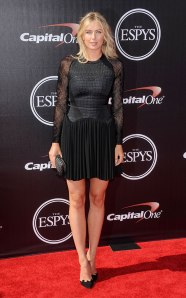 After winning the 2014 US Women’s Open at Pinehurst, her first major, Michelle Wie built on the momentum by earning earned Best Female Golfer, beating out Stacy Lewis, Inbee Park (who was also nominated for Best International Athlete) and Suzann Petersen.

An aspect of sport that does not always gain recognition, athletes with disabilities were acknowledged. In the Best Female Athlete with a Disability category, Jamie Whitmore was named the recipient. Fellow nominees included the likes of Minda Dentler, Oksana Masters, Tatyana McFadden and Laurie Stephens.

After leading the Minnesota Lynx to their second straight WNBA title, Maya Moore added to her growing collection of awards and honors by earning the ESPY for Best WNBA Player. In a field that included Elena Delle Donne, Angel McCoughtry and Candace Parker, any of the nominees would have been a worthy selection.

Of note, Moore was also nominated for the Best Female Athlete award. She would not get the opportunity to join Anderson as a two-time award winner this evening. The award would go to Ronda Rousey, who has dominated the UFC female division, having gone undefeated in her last four appearances. Mikaela Shiffrin and Breanna Stewart were among the other nominees for the honor.

Stewart would not leave the 2014 ESPY Awards empty handed. Having emerged as the greatest female college basketball player in America, she would earn the nod for Best Female Collegiate Athlete. Having led the UConn Huskies to a second consecutive national title, she follows in the proud footsteps of Huskies alumnae such as Moore, Rebecca Lobo, Sue Bird and Diana Taurasi.

The field for Best Female Collegiate Athlete was nothing short of impressive. Morgan Brian, a soccer player at Virginia, Taylor Cummings, who competes in lacrosse with Maryland, Micah Hancock, who rewrote the record books at Penn State Volleyball and Hannah Rogers, a softball player from Florida were all in contention for the award.