Having earned a podium finish in every ISBHF Women’s World Hockey Championship tournament, Canada looks to maintain such standing with another strong performance in 2019. Capturing the bronze medal at the 2017 edition of the Worlds with an intense defeat of archrival Slovakia, the gathering of Canadian stars is eager to return in the conversation for the gold medal.

Led by General Manager Sara Hayward, whose assiduous efforts have included service with the Canadian contingent at the ISBHF Masters, along with a key leadership role at the Canadian Ball Hockey Association (CBHA) Nationals, she has assembled a roster in collaboration with Paul Beale, Mandi Duhamel, who also served as a head coach for Canada at the 2018 IBSHF Worlds, plus Kevin Hughes.

Schedule
To Be Determined

Julianna Thomson
Making her debut for Canada in 2019, Thomson holds the potential to be the program’s goaltender of the future. At 18 years young, she has made her mark on the ice and on the slab. In addition to competition at the Manitoba Winter Games, her prodigy was evident at the Canadian Boys Under-17 Junior Nationals. Playing for a team dubbed the Manitoba Bisons, she played brilliantly against the boys, propelling her team into the elimination round. Emerging from the event with Most Valuable Goaltender honors, she led all goaltenders in goals against average during the elimination round.

Jamie Lee Rattray
Having won back-to-back CBHA National Championships (2014, 2015), Rattray is also competing with Canada’s entry at the 2019 IIHF Women’s Worlds. A member of Canada’s bronze medal team at the 2017 ISBHF edition of the World Championships, where she captured the scoring title, Rattray has established herself as a world-class competitor on the ice and on the slab. Poised to be a strong contender for the tournament scoring title once again, she will be counted on to be one of Canada’s leaders.

Dawn Tulk
A member of Team Canada at the last three ISBHF World Championships (2013, 2015, 2017), Tulk has blossomed into a program cornerstone. Among the star players for Newfoundland United, a constant presence at the CBHA Nationals, Tulk is consistently among Canada’s top scorers. Participating in her fourth ISBHF Worlds, she will be counted upon to provide strong leadership.

In the semifinals of the 2017 ISBHF Women’s Worlds, Canada suffered its first-ever medal round loss to the United States in a hard-fought 3-2 final. Bouncing back in the bronze medal game, defeating archrival Slovakia in a hotly contested event, Canada maintained its streak of podium finishes in ISBHF World play.

Storylines
The roster features eight players from Ontario (including Pallotta and Skeats), highlighted by six (Brenning, Brumm, Desmier, Girouard, Latreille, Rattray) from Ottawa. Next highest is the province of Alberta (featuring Dunlop and Swanson) with seven members, including five from Calgary (Fischer, Karpenko, Marsz, McLean, Sharp).

Considering that the medal round at the last two CBHA nationals has involved clubs from both cities (Calgary United and Ottawa Capitals), their collective presence shall be counted upon to propel Canada back into the gold medal game.

British Columbia (Francis, Jue), Manitoba (Cerilli, Thomson) and New Brunswick (McCann, Ring) have two each on the Canadian roster. As a side note, New Brunswick is also the home province of GM Sara Hayward while head coach Power is a native of St. John’s, Newfoundland.

Kristen Cooze, Aprill Drake and Dawn Tulk are the three representatives from Newfoundland. Having called each other teammates for Canada in 2015 and 2017, their standing as teammates once again has become an integral part of program lore.

Two Clarkson Cup champions are donning the Maple Leaf at the 2019 ISBHF Worlds. Of note, Jamie Lee Rattray and Devon Skeats were teammates on the Markham Thunder roster that won the 2018 Cup Finals. As a side note, both are also national champions at the CBHA level.

With Canada currently placing third in the ISBHF World Rankings, trailing Czech Republic and the United States, they aspire to climb back to the prestigious peak of first overall. Aiming to capture their fifth gold medal in tournament history, which would make them the first nation to do so, their goal of establishing a new gold standard is one that would propel the 2019 edition of Team Canada into a treasured place in the game’s lore.

Having appeared in the iconic Sports Illustrated Swimsuit Issue on two separate occasions (including a shoot where she was featured in body paint), Alex Morgan is featured on one of three variant covers for the 2019 edition of the issue, just months before she takes to the pitch with her fellow members of Team USA in the FIFA Women’s World Cup in France. As a side note, the other models include Tyra Banks and SI Swimsuit rookie Camille Kostek. Becoming only the second athlete to be featured on the cover, Morgan joins UFC legend Ronda Rousey in this exclusive club. Worth noting, mixed martial artist Paige van Zant, gymnast Simone Biles and skiing world champion Lindsey Vonn (who also posed in 2010) are the other athletes featured within this year’s pages. 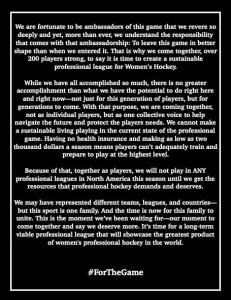 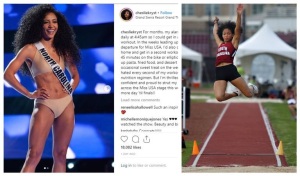 Cheslie Kryst, a former member of the University of South Carolina Gamecocks Track and Field Team was announced as 2019 Miss USA. Of note, it marks the first time that three major American beauty pageant winners are African-American. Of note, the other winners are 2019 Miss America Nia Franklin and recently crowned 2019 Miss Teen USA Kaliegh Garris. 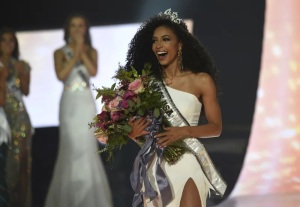