With her star on the rise, Stevi Schnoor is quickly emerging as one of Canada’s female sporting sensations. Currently competing with the BC Angels in Legends Football League Canada, her coming out party was the 2013 Pacific Cup.

As the LFL’s annual holiday showcase, the event was meant to feature the Seattle Mist and the Angels. With the 2013 LFL Canada season having been cancelled, the Los Angeles Temptation were last minute replacements for the contest. 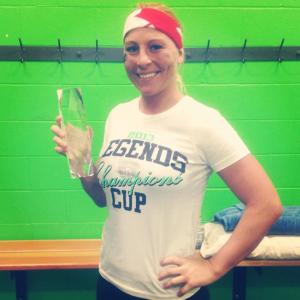 Undeterred, Schnoor and two of her Angels teammates, Mary-Anne Hanson and Deanna Schaper-Kotter, suited up for the Mist. Having made many sacrifices to prepare for the game, this remarkable trio of Angels not only bonded during the experience, but contributed to a 27-25 Mist victory. Of note, Hanson and Schnoor also became the first players to compete in consecutive Pacific Cups with two different franchises.

Scoring three touchdowns in the contest, Schnoor was recognized as the Most Valuable Player of the Pacific Cup. Dubbed Stevi Wonder by the fans, her performance provided her with a treasured place in Seattle Mist lore.

Of note, this follows up on another sparkling MVP performance the year prior. During the inaugural LFL Canada season in 2012, Schnoor nabbed postseason MVP honors as the Angels claimed the league championship. That year, she would also compete with BC’s provincial team in the 2012 Canadian National Women’s League Finals.

To those who know her on the field of rugby, her success comes as no surprise. Known affectionately as Breezy, she competes at the Inside Centre position while competing for Canada at the 2009 Nations Cup. Having won five BC provincial high school rugby championships at Gleneagle, there is no question that Schnoor is a proven winner.

Recognized as one of the MVP’s from BC Rugby News in 2011, she is also a former Canadian women’s national rugby team member. Also a founding member of the United RFC, she has over 15 years experience in the sport.

Although the game of football is a series of executed plays which only last for several seconds, Schnoor adjusted very quickly. Her endurance as a rugby player enabled her to contribute to the Angels on offense, defense and special teams. With the support of rugby teammates at Angels contests in 2012, it is testament to the high regard she is placed in.

Truly a team player and a friend to so many teammates, Schnoor is also an athletic humanitarian. Having also played for the Dog River Howlers, a 2013 sojourn to Kenya included Howler rugby balls and t-shirts. Having travelled with her father to the African nation with the charitable cause A Better World, whose focus is on community development, Schnoor is also a champion off the field.