Having captured the hearts and minds of sports fans throughout the world, the Dufour-Lapointe sisters have experienced a newfound celebrity status. Competing in the freestyle skiing event, Chloe, Justine and Maxime represented a rare triumvirate of sisters in the same event.

Although 19-year-old Justine would capture the gold and 21-year-old Chloe followed right behind with silver, Maxime was not able to capture the bronze. As a side note, the three did achieve a podium sweep at the national level in dual moguls in 2010. That year, Chloe qualified for the 2010 Vancouver Winter Games, surprising many competitors with a fifth-place finish. 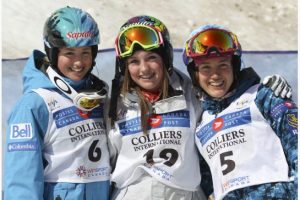 Despite the medal shutout, 25-year-old Maxime is equally popular and determined to emulate their success at the 2018 Winter games in Pyeongchang, South Korea. Of note, the medal performance for Justine and Chloe made them the first-ever Canadian siblings to earn medals in a Winter Games event.

The medal performance capped off a magical time for the sisters in Sochi, as media outlets throughout the world, including the New York Times covered their remarkable run. During a news conference involving all three sisters, the tone was one of a family affair. Maxime stated how proud she was of her sister’s historic and impactful performance in Sochi. 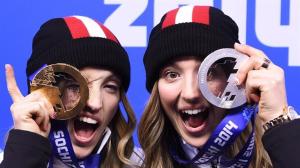 Middle sister Chloe would bring an element of levity to the serious conference by discussing sibling rivalry, sharing meals together and their love of boating. There was also a serious side to Chloe, shedding tears in a display of heartfelt emotion as she acknowledged the support of her parents, father Yves Lapointe and mother Johane Dufour. By the age of three, each daughter was part of skiing lessons in the Laurentians, north of Montreal, Quebec.

In addition to the sacrifices both parents made in order to ensure that their daughters could achieve their athletic dreams, there was also a tremendous amount of emotional support. As the sisters were making their mark on the World Cup ski circuit, it was not uncommon for Johane to receive three separate phone calls from each of her daughters.

There is no question that Canadian sports fans have not heard the last of the Dufour-Lapointe sisters. Justine and Chloe are considered very outgoing and both have a life-long love of fashion. While Chloe considers herself a fashion princess, Justine has already expresses aspirations to expand her scope into a fashion line.

While all three sisters have grown up competing against each other, the mutual respect and love for each other cannot be hidden. It certainly signified tremendous growth for them as competitors and as role models, while adding an element of sportsmanship that makes their journey one of the true feel-good stories at Sochi.