Winning her first major international wrestling tournament, Dori Yeats could not contain her smile. Hailing from Montreal, Yeats bested Angele Tomo of Cameroon by a convincing 10-0 score in the final of the Women’s Wrestling event for the 69 kilogram weight class. It was part of a day that featured Canada grab three gold medals in wrestling at the Commonwealth Games. Boldly proclaiming that she was planning to eat, sleep and go to the school with the medal, her proud demeanor was a symbol of national pride for Canadian sports fans.

Having celebrated her 21st birthday on July 29, Commonwealth gold could not have come at a better time. Back in April, she was the recipient of a $500 bursary from La Fondation Desjardins-Sport-Etudes. A student at Vanier College in Montreal, she plans to pursue further studies in Civil Engineering at world-renowned McGill University.

Yeats has already accumulated a wealth of international wrestling experience. Competing in the freestyle 70 kg event at the 2010 Summer Youth Olympics in Singapore, she would emerge with the gold medal. In the final of that event, she would best South Korea’s Jinju Moon.

Two years later, she would grab the silver at the World Championships, suffering the loss to American Adeline Gray. Despite the loss, she managed gold medal performances in the 2012 and 2013 editions of the Junior World Championships (in the 67 kg division). 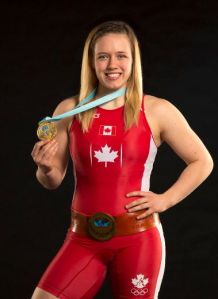 Her father Doug Yeats was a four-time member of Canada’s Summer Games wrestling team, wrestling in the 68 kg division. Of note, he had the opportunity to wrestle on home soil when Montreal hosted the 1976 Summer Games. Performances at the 1984 (Los Angeles), 1988 (Seoul) and 1992 (Barcelona) Games would follow. His best performance was in 1984 when he placed in fifth.

A fourth-place finish at the 2014 Women’s World Cup is another encouraging sign that Yeats could emerge as one of Canada’s greatest female athletes in the years to come. With her next goal to qualify for the 2016 Summer Games in Rio de Janeiro, Brazil, her potential may finally bring an elusive Olympic medal to the proud Yeats wrestling family.